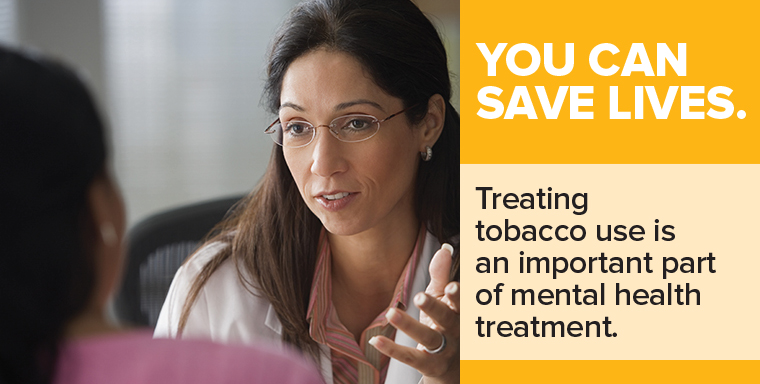 2. People with behavioral health conditions who smoke get sick, become disabled, and die early from smoking-related diseases. Estimates of the mortality gap between people with mental illness or substance use disorders and people without these disorders varies widely but is minimally about five years and may be as high as ten years or more, and cigarette smoking causes many of these deaths.6,7,8 Adults who use drugs and smoke cigarettes are four times more likely to die prematurely than those who do not smoke.9 Because of the heavy disease burden, smoking cessation interventions should be routinely offered within behavioral health care settings. Integrating evidence-based tobacco use disorder treatment into the behavioral health care you provide is an important part of your patients’ behavioral health recovery and overall wellness.

3. Many people with behavioral health conditions who smoke want to and can quit smoking. A common misconception is that people with behavioral health conditions who smoke either cannot or will not quit smoking.10 However, research shows that adults with behavioral health conditions who smoke—like other people who smoke—want to quit, can quit, and benefit from proven smoking cessation treatment.11 NYS Medicaid covers the evidence-based smoking cessation treatments of counseling and all seven FDA-approved cessation medications; however, in 2017, less than half of NYS Medicaid enrollees who smoke or were recent quitters were aware of the benefit.12 You can help by asking patients about their tobacco use, providing support and education, including information about the Medicaid smoking cessation benefit, and providing treatment to those who are ready to quit.

4. Quitting smoking does not interfere with behavioral health recovery and may have mental health benefits. It’s a myth that smoking has mental health benefits and helps patients cope with their psychiatric symptoms.10 Smoking is associated with poor clinical outcomes, including greater depressive symptoms, greater likelihood of psychiatric hospitalization, and increased suicidal behavior.13,14 Smoking can complicate treatment by accelerating the metabolism of certain psychiatric medications, resulting in the need for higher doses to achieve the same therapeutic benefit.10 When you provide proven cessation treatment, people can quit without worsening their psychiatric symptoms.15,16 Quitting smoking is associated with significant reductions in depression and anxiety, improved cognitive functioning, lower rates of re-hospitalization, lower rates of suicide, and is associated with marked improvements in mental health over time, whereas continued smoking is associated with little change over the same period.13,14,17,18,19,20,21

Adapted from the Centers for Disease Control and Prevention – Smoking and Mental Health: Five Things Every Health Care Provider Should Know

Providers play a key role in treating tobacco use disorder as part of their therapeutic work with people who smoke or use other tobacco products. Five things to know before your next clinical encounter: